Zidane not looking to copy Klopp’s blueprint for success after delivering plenty of his own at Real Madrid | Goal.com 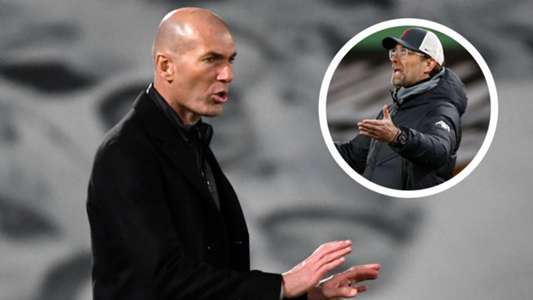 The Frenchman has landed more major silverware during a second stint as coach at Santiago Bernabeu, but is always looking to learn

Zinedine Zidane is always open to learning lessons from fellow managers, but the Real Madrid boss insists he will not be looking to “copy” the blueprint for success drawn up by Liverpool coach Jurgen Klopp.

The Frenchman is due to lock horns with a highly-rated German tactician on Tuesday, with a heavyweight contest lined up between two multiple Champions League winners at the quarter-final stage of this season’s competition.

Zidane has delivered that particular trophy to Santiago Bernabeu on three occasions, along with a couple of La Liga titles, and sees no reason to emulate the methods of a rival who has achieved domestic and continental success with a Premier League giant.

Quizzed at a pre-match press conference on whether he will be looking to replicate any of Klopp’s traits in his own coaching career, Zidane said: “He’s a great coach and an experienced coach. The work he has done in all his career has been good and now with Liverpool.

“I don’t need to copy him and he doesn’t need to copy me, but I do look at all coaches to see what they do. In particular, I saw a lot things from other coaches when I was doing my coaching course.”

Zidane was also asked again about the fitness of Eden Hazard, with the Belgian forward preparing to make his latest return from a niggling knock.

The Blancos boss said of a player who has struggled to make his mark on the back of securing a big-money switch to Spain in 2019: “The important thing is that he is fully recovered when he comes back, although I don’t think he was rushed back last time.

“We never rush a player. We’ll see when Eden can recover.”

Real are determined to edge out Liverpool, a side they overcame in the 2018 Champions League final, and keep themselves on course for a 14th European triumph.

There is also a determination on the part of everyone at the Bernabeu to chase down arch-rivals Atletico Madrid, seeing off Barcelona in the process, and defend a La Liga title.

With two major prizes still up for grabs, Zidane was asked if his team were written off by some too early in what has been a testing campaign at times.

“I have a lot of confidence in my team. So yes, but we can’t change that. We can just do our work every day. That’s how this team has been able to turn things around.

“We never give up. As long as there’s hope, we’re alive in both competitions and will keep battling. “We’ve had bad moments and now we’re in a good moment, but all of that means nothing yet since we’ve not won anything yet.”