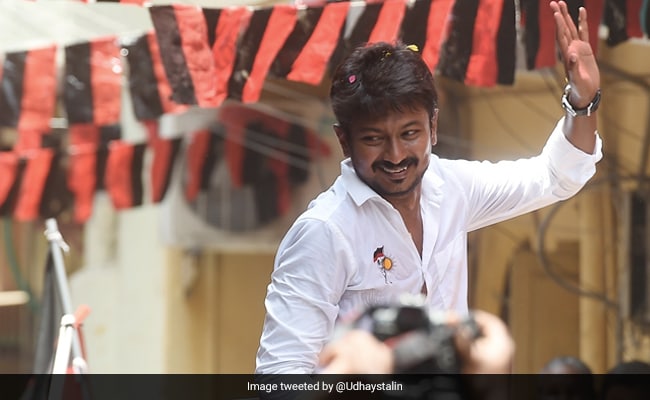 Udhayanidhi Stalin, after casting his vote today in Tamil Nadu, compared his debut poll outing to an exam.

To be fair, he was asked whether he was like a school student waiting for an exam. “I have already written my exam,” said the 43-year-old DMK candidate, wiping his face in Chennai’s muggy heat.

“Every candidate’s hope is to win. Hopefully I will also win. I hope people will make me win.”

Asked if he expected to become minister in future, he replied: “Only my leader will decide if I will be a minister if DMK wins.”

Udhayanidhi Stalin, the son of DMK chief MK Stalin and grandson of the party’s iconic “Kalaignar” – M Karunanidhi — is the DMK’s candidate from Chepauk-Thiuvallikenni, a party stronghold, where his main rival is PMK’s AVA Kasali.

Before voting, Udhayanidhi, his father MK Stalin and mother Durga Stalin visited the memorial of Karunanidhi.

Udhayanidhi, a former actor, had kept more or less a low profile, until the last few weeks of the campaign.

Recently, he has made several provocative statements about the BJP’s top leaders.

After Union Home Minister Amit Shah, at a rally, asked people whether they wanted to see Tamil Nadu’s development or Udhayanidhi Stalin – a dig at dynasty politics – he countered: “I am asking Amit Shah, I will write all the property in my name, transfer it to Jay Shah. Will Jay Shah be willing to transfer all his property in my name?”

When PM Modi mocked Udhayanidhi as “a crown prince” and suggested that his rise in the DMK had upset party ranks, Udhayanidhi listed BJP leaders who he said had been sidelined in PM Modi’s rise to power. He controversially said veteran BJP leaders Arun Jaitley and Sushma Swaraj, who died in 2019, had felt “mentally tortured” by PM Modi.

The daughters of the two leaders emphatically refuted the allegation and the BJP complained against Udhayanidhi, urging the Election Commission to ban him.

Stalin Junior has been a filmmaker and an actor who has starred in at least a dozen films. He even won Filmfare’s Best Male Debut award in 2013.

He had always dismissed talk of joining politics. That was until in 2019, he was made DMK’s youth wing in-charge after his father was promoted as working president of the party.

The DMK hopes to continue its winning streak of the 2019 national election and defeat the state’s ruling AIADMK, which has been in power for 10 years.

All 234 seats of Tamil Nadu vote today. The results will be declared on May 2.