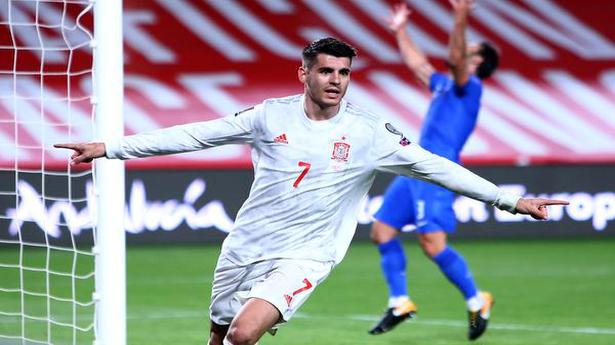 European giants Germany, Italy and England all got off to a winning start in World Cup qualifying, while Zlatan Ibrahimovic marked his return to international soccer with an assist to help Sweden to victory on Thursday.

There was disappointment for Spain, however, as it was held to a 1-1 draw at home by Greece.

In Granada, Alvaro Morata put Spain ahead in the first half but the visitors equalised with a penalty converted by Anastasios Bakasetas early in the second period in one of the team’s few scoring chances.

Spain coach Luis Enrique brought Youngsters Pedri and Bryan Gil on to improve the team’s attack but they couldn’t do much to change the game’s outcome.

The 39-year-old Ibrahimovic, who last played for Sweden at the 2016 European Championship, set up Viktor Johan Anton Claesson’s first-half goal in a 1-0 win over Georgia.

He set up the goal after receiving a pass on his chest and scooping the ball into the middle of the area for Claesson’s close-range shot in the 35th minute.

Germany coach Joachim Low began his farewell tour with a 3-0 win against Iceland in Duisberg. Germany lined up before kickoff wearing T-shirts over its national-team jerseys bearing the message “HUMAN RIGHTS.”

It was an apparent statement about human rights abuses in Qatar, which is under scrutiny because of its discriminatory laws and conditions for the migrant workers who are helping to build infrastructure for the World Cup.

There was also a comfortable opening win for England, which beat San Marino 5-0 at Wembley.

After failing to qualify for the last World Cup for the first time in six decades, Italy got its campaign off to a positive start with a 2-0 win over Northern Ireland.

Share
Facebook
Twitter
Email
Tumblr
Previous articleWest Indies vs Sri Lanka | Bonner’s maiden ton takes Windies to a draw
Next articleNo Points For Guessing Who Clicked This Stunning Pic Of Dia Mirza. She Thinks He Is “Getting Better”
- Advertisement -

The Sugar Millers will be hosted by the giants who have had a good run in the Caf Champions League Mtibwa...
Read more
Football