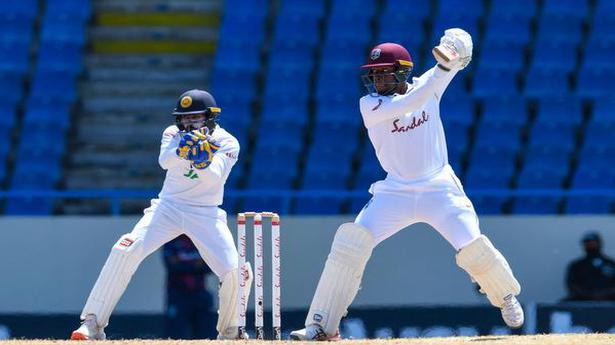 A patient, unbeaten maiden Test hundred by Nkrumah Bonner anchored a day of West Indies batting resistance against Sri Lanka as the home side ground through the fifth and final day of the first Test to ensure a draw on Thursday.

In just his third Test, the 32-year-old Bonner further enhanced an already burgeoning reputation as a middle-order batsman with considerably more substance than style.

He compiled a dogged 113 not out in just over seven hours during which he faced 274 balls, stroking 13 fours and one six. It ensured his team comfortably saved the match at 236 for four, having been set the unlikely target of 375.

After missing out on hundreds in each of his first two Tests in Bangladesh last month, the Jamaican right-hander was not to be denied third time round on a day.

He featured in a 105-run third-wicket partnership with Kyle Mayers which occupied almost three hours and effectively killed off Sri Lankan hopes of completing an excellent fightback from a poor first day with victory.

It ensures both teams will have everything to play for when the second and final Test starts at the same Sir Vivian Richards Stadium venue on Monday.

Sri Lanka will be concerned though about the fitness of first-choice wicketkeeper Niroshan Dickwella who appeared to have either sustained or aggravated a finger injury on more than one occasion during the course of the day, each time requiring prolonged treatment on the field before he continued.