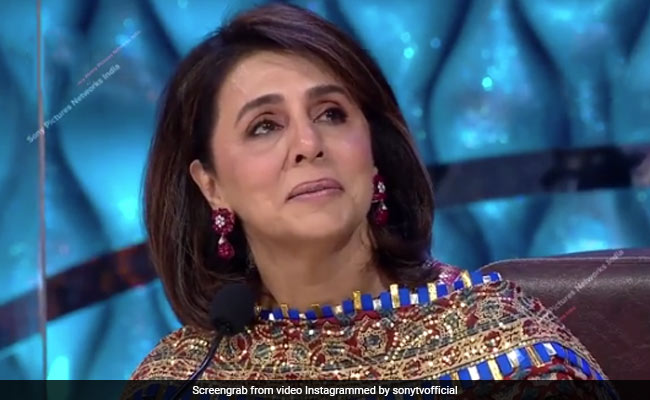 Neetu Kapoor in a still from Indian Idol promo

Neetu Kapoor recently joined Indian Idol for a special episode as a guest. During her appearance on the show, Neetu Kapoor created some cherishing memories and also quite a few emotional ones. On the show, a video montage was played up, which featured video messages from friends and one-time colleagues of Neetu’s husband Rishi Kapoor. The actor died in April last year. Remembering Rishi Kapoor in the video, Jeetendra said: “Aap duniya ke liye Rishi Kapoor honge but mere liye aap Chintu hai.” Addressing Neetu Kapoor as a “brave girl,” Jeetendra gave her a shout out for having been the “best companion” to Rishi Kapoor. Neetu Kapoor visibly teared up at Jeetendra’s heart-warming words but held back tears through the video. Actor-filmmaker Rakesh Roshan also remembered Rishi Kapoor as an omnipresent essence.

Catch a few glimpses of the emotionally heavy moments on Indian Idol in this promo shared by Sony TV:

Meanwhile, Neetu Kapoor cheered up when video messages from her son Ranbir Kapoor and daughter Riddhima Kapoor Sahni were played up on screen. “Mera bacha,” she exclaimed seeing Ranbir on screen. She showered kisses to Riddhima, who in her video message said: “Ma, aap humare family ki Iron Lady ho.”

Rishi Kapoor died in Mumbai on April 30 after battling cancer for two years. He was 67. Rishi Kapoor is often remembered by Neetu Kapoor in her posts on Instagram with heart-touching notes about the value of loved ones. “End of our story,” she had written in her good bye note to Rishi Kapoor.

<!-- -->The Dalai Lama is believed to be a living Buddha who is reincarnated after his death.Tenzin Gyatso, the 14th Dalai Lama-the spiritual...
Read more
Top Stories