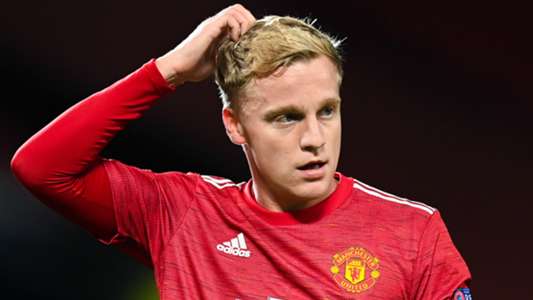 Donny van de Beek looks “lost” at Manchester United, according to Mark Hughes, who says a £40 million ($55m) flop is edging closer to the Old Trafford exit with each passing game.

United forked out big money to bring in Van de Beek from Ajax last summer, but he has so far failed to live up to his reputation as one of the most promising young midfielders in Europe.

The Dutchman blew his latest chance to make an impact as the Red Devils crashed out of the FA Cup at the hands of Leicester City, and Hughes thinks he is running out of time to save his career in Manchester.

“Clearly it’s difficult, he hasn’t had enough game time and you can see that in his play,” The ex-United star told Stadium Astro.

“He’s wandering and not really getting on the ball, doesn’t know how to affect the game, can’t demand the ball of his team-mates because they’re not quite sure whether or not they have enough confidence in him.

“He looks like a guy who’s wandering around lost on the field. Okay, some of that responsibility he has to take on himself, he has to be more demonstrative, he has to be a key player.

“He’s a big-money signing he’s come from a big club in Ajax so he’s used to being a top player of influence.

“But clearly, since he’s come to United he hasn’t shown anything like what the level he needs to be at to remain a Man United player.

“He can only have so many opportunities, at some point he’s going to have to take them or United will move him on. I think they’re edging towards that decision if he’s not careful.”

Ole Gunnar Solskjaer made five changes to the team that beat AC Milan in the Europa League for the Red Devils’ arrival at the King Power Stadium on Sunday.

Van de Beek was among those drafted in for a rare start, but he only lasted 64 minutes before being hauled off with United 2-1 down in the quarter-final tie, having failed to affect the game in any meaningful way.

Leicester took the lead after Kelechi Iheanacho latched onto a short back pass from Fred mid-way through the first half, but Mason Greenwood produced an expert finish to level the scores shortly before the interval.

The hosts regained the lead when Youri Tielemans struck from just outside the box in the 52nd minute, and Iheanacho rounded off a 3-1 victory with a late header which left Solskjaer dejected on the touchline.

Leicester dominated the midfield battle throughout the 90 minutes and deserved to reach the last four of the FA Cup at United’s expense, with the Europa League now the only trophy left for the Manchester outfit to fight for in the final months of the season.

Van de Beek’s underwhelming outing at Leicester marked his 27th appearance across all competitions for United, but it was only the 12th time he had been included in Solskjaer’s starting XI.

The 23-year-old has contributed just one goal and one assist to the Red Devils’ cause to date, with his last start in the Premier League coming way back in December.

The former Ajax star is contracted to remain at Old Trafford until 2025, and Solskjaer has publicly insisted it will take time for the playmaker to reach his full potential, but speculation over his future will continue to swirl until he can prove he deserves a regular place in the team.