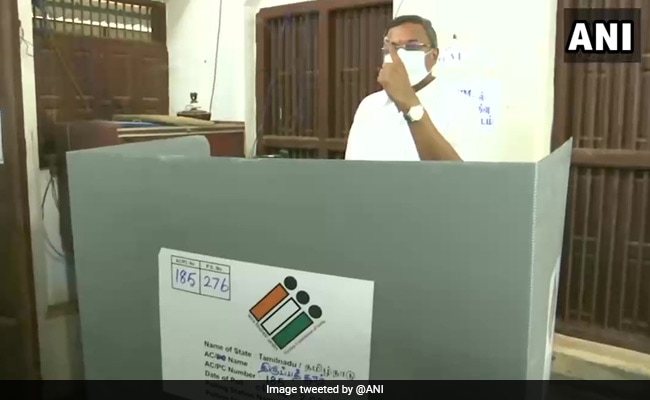 Congress leader Karti Chidambaram today cast his vote along with his wife and daughter at a polling booth in Tiruppathur, Sivaganga district in Tamil Nadu.

“I believe that DMK-Congress alliance will have a massive victory in Tamil Nadu. It will be a repeat of the 2019 election where the alliance code a handsome victory,” said Karti Chidambaram.

“The people of Tamil Nadu want a regime change and a government which does not have the smell, stain or shadow of Hindi, Hindutva BJP in Tamil Nadu,” he added.

Earlier, Tamil Nadu Chief Minister Edappadi K Palaniswami cast his vote at a polling station in Siluvampalayam, Eddapadi and urged voters in the state to do the same.

“I appeal to all to cast their vote in the legislative assembly elections,” said the Chief Minister.

Polling across 234 Assembly constituencies in 38 districts of the state began at 7 am today.

Meanwhile, the state recorded a voter turnout of 39.55 per cent till 1:30 pm across 234 Assembly constituencies in the state Assembly polls, according to the Election Commission (EC). A total of 3,998 candidates are in the poll fray. The counting of votes will be done on May 2.