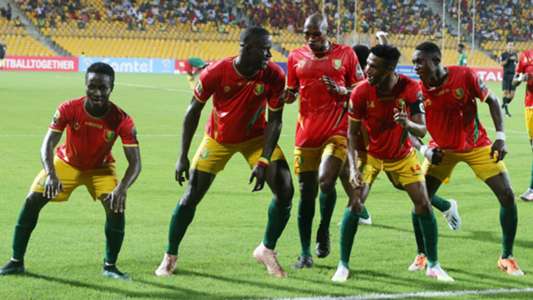 Saint-Etienne goalkeeper Bangaly Sylla has been handed his first national call-up for Guinea’s 2022 Africa Cup of Nations qualifiers against Mali and Namibia.

The Syli Nationale will take on the Eagles on Wednesday before facing the Brave Warriors on Sunday, March 28.

Saint-Etienne confirmed the 18-year-old has been given the all-clear to join Guinea after the country met the necessary Covid-19 conditions for his release.

The young shot-stopper has been impressive for the Greens’ reserve team this season which has caught the attention of coach Didier Six.

The goalkeeper was not initially on the 24-man squad earlier released but has been drafted in after the country was hit by the withdrawal of some of their players in Europe due to Covid-19 protocols.

Also permitted to link up with the Syli Nationale is Saidou Sow who has been part of Saint-Etienne’s campaign this season.

The centre-back has two caps for Guinea after making his debut in October 2020 against Cape Verde and will be expected to play a part in the qualifiers.

“Selected by Didier Six to defend the colours of Guinea in the last two qualifying matches for the 2022 Africa Cup of Nations, Saidou Sow and Bangaly Sylla were waiting for a green light to join Guinea,” read a statement from the club website.

“The conditions are now met so that they can travel in accordance with the health protocol, the two Stéphanois will therefore join their selection. “

Guinea are second on the Group A table after gathering eight points from four games and will hope to secure victories in their outings against the Eagles and the Brave Warriors.

They reached the Round of 16 of the 2019 Afcon in Egypt and will hope to nick a place in the next edition of the biennial tournament in Cameroon.

Guinea captain and Liverpool midfielder Naby Keita has been allowed to feature in only one of the two qualifiers.

The 26-year-old has struggled with injury problems since his arrival at the Premier League club from Bundesliga side RB Leipzig in 2018.

He has, however, been a key member of the Syli Nationale and has made 39 appearances for the African country since his debut in 2012.