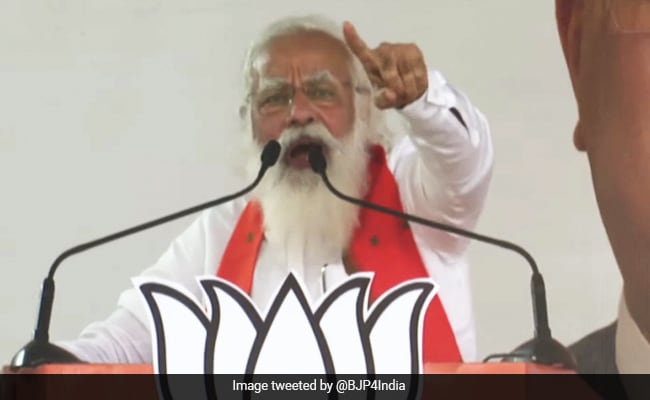 With less than a week for the first phase of Assembly elections, Prime Minister Narendra Modi addressed a rally in Bengal’s Bankura district on Sunday, where he accused Chief Minister Mamata Banerjee of failing to develop the state over the past 10 years and warned the chief of the ruling Trinamool that “aschol poriborton asche” (real change is coming).

The Prime Minister also mocked Ms Banerjee over comments calling on party workers to keep an eye on EVMs (electronic voting machines) during elections for fear of tampering. He said this showed the Trinamool was anticipating defeat in the forthcoming election.

“Anticipating defeat, didi (Ms Banerjee) has already started questioning the EVMs (electronic voting machine) which had brought her to power 10 years back,” he added.

On Saturday Ms Banerjee, addressing a rally in East Midnapore, said the BJP did not fight elections in a democratic manner and urged Trinamool workers to guard EVMs after voting in each phase.

“The EVMs should be tested 30 times before the start of the polls to ensure there is no foul play. But, If any machine develops faults, please remain calm until it is repaired,” she said.

The Prime Minister, whose BJP has accused the Trinamool of deliberately stalling implementation of central government schemes, questioned Ms Banerjee over the lack of infrastructure in the state, and said she would never have been voted to power if “you had shown your real face”.

The Prime Minister also referred to posters that showed Ms Banerjee “playing football with my head” – the popular sport has emerged as a political metaphor ahead of elections – and said “you can kick my head… but I will not let you kick ‘vikas (development)’ out of Bengal”.

“Didi (Ms Banerjee) You can keep your foot on my head… you can kick my head… but I will not let you kick ‘vikas‘ out of Bengal. I want to tell didi something from Bankura… I keep my head bowed at all times to serve the people of Bengal,” he said.

The Prime Minister appealed to voters, especially those voting for the first time, to ensure a “double engine” government in Bengal to “make shonar Bangla (golden Bengal)” a reality.

Assembly polls in West Bengal will be held across eight phases from March 27 to April 29.

The results will be declared on May 2.

With input from PTI