Rahul, Jadeja warm up in style 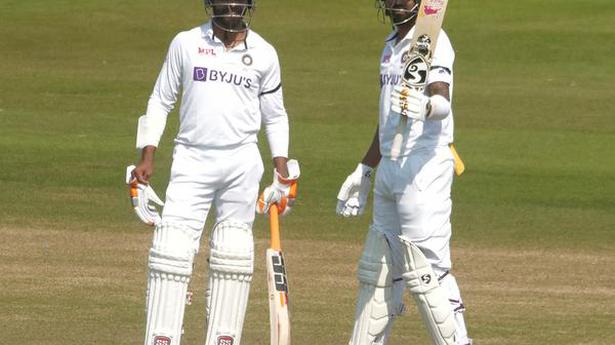 K.L. Rahul (101 retired out) and Ravindra Jadeja (75) powered the Indians to 306 for nine in 90 overs on the opening day of the warm-up game against County Select XI on Tuesday.

Rahul and Jadeja, who came together with the side wobbling at 107 for four, added 127 for the fifth wicket. The former was at his fluent best during his 150-ball knock, stroking 11 fours and a six. The latter’s 146-ball innings had five fours and a six.

Rohit Sharma, leading the side in the absence of Virat Kohli and Ajinkya Rahane who were rested for the match with minor niggles, fell for nine. Mayank Agarwal contributed 28.

Cheteshwar Pujara (21) and Hanuma Vihari (24) failed to click before it was left to Rahul and Jadeja to resurrect the innings. India’s fringe players Avesh Khan and Washington Sundar turned up for County Select after the home team lost players due to injury and COVID-related isolation. Avesh bowled 9.5 overs before sustaining a thumb injury.

Clarifying on Kohli and Rahane’s injuries, BCCI secretary Jay Shah said in a statement, “Kohli felt some stiffness in his back late on Monday and has been advised rest by the BCCI medical team. Rahane has mild swelling around his left upper hamstring.”.