Pochettino admits it will be difficult for PSG to retain Ligue 1 title after Lille defeat | Goal.com 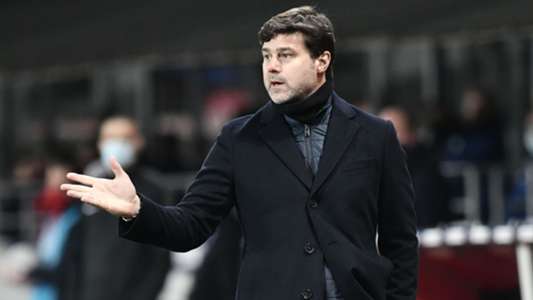 The Parisians were sunk by Jonathan David’s first-half finish in a tussle between the top two at Parc des Princes, with Neymar sent off late on

Mauricio Pochettino has admitted Paris Saint-Germain face an uphill struggle to retain their Ligue 1 title this season after they slipped to a bad-tempered defeat against main rivals Lille.

The Parisians were sunk by Jonathan David’s first-half finish in a tussle between the top two at Parc des Princes, with the hosts’ difficult Easter weekend compounded by Neymar’s dismissal for a second yellow card following a fracas with Tiago Djalo late on.

With just seven matchdays to go, the result has left PSG three points adrift of their rivals at the summit and only one ahead of third-place Monaco, leaving their manager to acknowledge that the odds are stacked against them for a fourth successive title.

What did Pochettino say?

“It’s going to be difficult,” the Argentine said in his post-match comments. “We knew very well that it was going to be tough until the end and of course we need to keep going and think of all competitions.

“They created fewer chances than us but they were more clinical in front of goal. I think we deserved more at least a point or even three. In the end we lost and of course we’re very disappointed with the result.

“We didn’t create enough. We created more than them but not enough and maybe we showed a lack of aggression in the final third. We were thinking that with the dominance we would score but in the end the time ran out we didn’t score and we lost the game.”

When he arrived as Thomas Tuchel’s successor in early January, former Tottenham boss Pochettino could not have asked for a better start to life in the French capital.

Within two weeks of taking the job he had finally broken his barren silverware streak as a manager, claiming the first prize of his coaching career in the shape of the 2020 Trophee des Champions.

Yet despite having won 14 of his 20 games at the helm so far, three consecutive home defeats in the top flight – against Monaco, Nantes and now Lille – have left his side trailing in the quest for another domestic crown.

Conversely, he has delivered emphatic results in knockout competition, steering PSG through the first three rounds of the Coupe de France without trouble – including a 3-0 drubbing of Lille in the third round – and demolishing Barcelona in the Champions League with a 5-2 aggregate victory.

Pochettino and his team still remain in contention in Ligue 1 and will be determined to ensure that they make up for their defeat when they face Strasbourg next weekend.

Before then , PSG have a Champions League final rematch to attend to, as they face Bayern Munich – who bested them in last season’s showpiece – in the first leg of their quarter-final tie.

The Argentine will also be left to sweat on any potential disciplinary action against Neymar, following his indiscretions at the close of Saturday’s defeat.