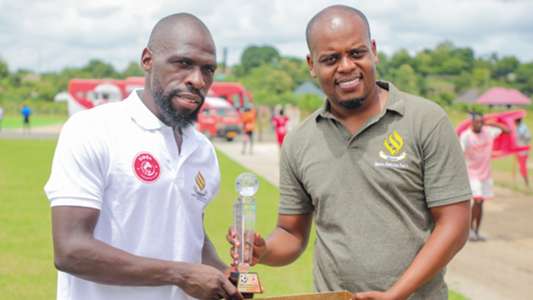 Kenya defender Joash Onyango has vowed to do his best and help Simba SC to achieve their set targets for the 2020-21 season.

The Msimbazi giants are currently competing in three major competitions – Mainland Premier League, domestic Cup, and the Caf Champions League – and according to the former Gor Mahia star, they will make sure they fight for everything on offer.

The burly defender was speaking moments after being crowned the best player for Simba in the month of March, an award he became the second recipient after Mozambican winger Luis Miquissone, who had won the inaugural gong in February.

The award is an initiative from the Msimbazi giants’ fans, is sponsored by Emirate Aluminum Profile company, and will see players rewarded for their efforts every month.

Onyango secured the award after beating the first-choice goalkeeper Aishi Manula and Miquissone in the votes cast by the fans – of a total of 25,719 votes cast, the defender managed 20,288.

Tanzania keeper Manula, who is being linked with a transfer to Sudanese outfit Al Merrikh, came second after garnering 4,673 while Miquissone managed 758 to finish third.

“I want to thank the fans for recognising the efforts I am putting up for the club,” Onyango told Simba’s official website after receiving the trophy and prize money of Tsh1, 000, 000 on Monday.

“The fans have clearly shown they love what I am doing here by giving me a lot of votes and I also want to thank sponsors Emirate Aluminium for giving me this award.

“I want to assure our fans I will do my best to make sure the team achieves some of the targets we set when the new season kicked-off, I also want to assure them we will fight as a team, we know we made a promise to them and we will make sure it is achieved.

“I also want to thank my teammates for this award, without them, I could not have achieved the win, we always play as a team and the award will give me the much-needed desire to continue to fight for the team.”

On Saturday, Simba progressed to the quarter-finals of the Champions League and speaking to Goal after beating AS Vita Club of the Democratic Republic of the Congo 4-1 at Benjamin Mkapa Stadium, Onyango said he was delighted to achieve the feat, something he could not do while at Gor Mahia.

“It feels good to advance to the next stage of the competition and being my first time it is special,” Onyango told Goal.

“We are happy to have secured our place in the last eight, but we know we have a job to finish when we will play the defending champions Al Ahly.”

The 28-year-old, however, admitted he was hurt by the goal they conceded against the DR Congo side despite a healthy win.

“Our target as defenders was to ensure we finish the group stage with a clean sheet,” Onyango revealed.

“However, it did not happen and we feel disappointed for not achieving our target. But everyone played well, it was a deserved win for us and now we can start preparations for the next assignment.”

Simba will conclude their group matches with a clash against Al Ahly of Egypt on April 9 in Cairo.

The clash is a dead rubber, with both teams already secured of qualification for the last eight while the Tanzanians have an unassailable five-point lead at the top of the Group A table.