Omurwa: Harambee Star on what Onyango told him after red card against Egypt | Goal.com 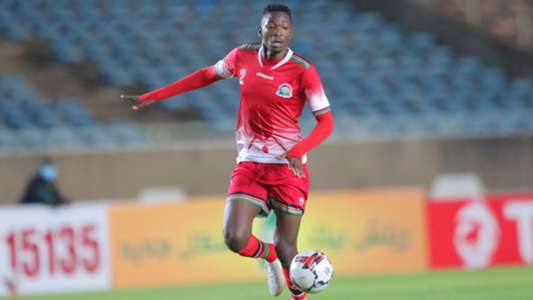 Harambee Star Johnstone Omurwa ended his debut against Egypt on a low note as he was sent off in the 75th minute for the off the ball incident.

Until that time, the towering Wazito FC centre-back had put in a solid performance alongside Simba SC defender Joash Onyango as Kenya settled for a 1-1 draw with the Pharaohs in the Africa Cup of Nations Group G qualifying game at Kasarani Stadium on Thursday.

The 22-year-old went on to reveal what the Mnyama defender told him after his red card.

“Onyango came and told me to be strong and that in football it usually happens,” Omurwa told Goal on Saturday.

“He reminded me he was also sent off on his debut [against Ghana in 2018 coincidentally during the 2019 Afcon qualifiers] but it did not affect him. It was a motivation and he came back stronger.

“So I have to continue working harder and hope to be involved in the future. My aim is to help my country perform well.”

The defender has further explained his debut in the Afcon qualifier and why he had a good outing.

“I did not expect to have an easy evening against one of the best teams in the continent,” Omurwa added.

“‘Marcelo’ [Erick Ouma] and Onyango have played in that top-level before, but Sakari and I were tasting the waters for the first time. Onyango guided me well and when I told him anything, he did not ignore me because he was my senior and more experienced. It was the same case with ‘Marcelo’ and Sakari.

“It made our job easier.”

“I can say I am happy with mostly the local players who got their debut on the highest level, someone like Dan [Sakari] playing his first time, Abdallah [Hassan] playing in a big game like this one and they did not show any stage fright,” the tactician told Goal.

“So I would say it is a good beginning for the local-based players and they need to believe in themselves that they can do it.

“I said previously the Kenyan league is very competitive, and when you look at how people like Johnstone [Omurwa] also played in their first debut at senior level, it gives you hope, hope also to the local players that it is not impossible to be in the national team and perform.”