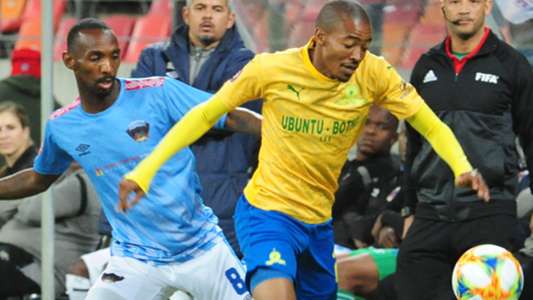 If Downs win in Polokwane, they will go six points clear of Golden Arrows and AmaZulu and still have two matches in hand on those two clubs

Former Orlando Pirates winger Thabo Rakhale is one of the players Mamelodi Sundowns need to be wary of when they take on TTM in a league encounter at the Peter Mokaba Stadium on Tuesday, says the Brazilians’ co-coach Rhulani Mokwena.

TTM are struggling near the foot of the table – they are in 15th place, three points above Black Leopards and one behind Chippa United.

But Mokwena feels that the arrival of Dylan Kerr as head coach, together with the star quality the Limpopo side has in their ranks, means TTM cannot be taken lightly. Even more so when considering that Sundowns drew 0-0 with Tshakhuma earlier this season.

“TTM has had a couple of changes with Dylan Kerr coming in, they have a good and quality attack that has the speed to pose danger,” Mokwena was quoted saying on his club’s website.

“They have players like Rakhale, [Mogakolodi] Ngele, [Thabo] Mnyamane these are players that can decide the direction of the game at any moment. They have aggressive wing-backs, also our boy Nico Lukhubeni (on loan at TTM from Sundowns) who is doing well.

“They have a great team so we have to be aware of those. We have analysed them, they are very fluid and we have to make sure we create something from there. It is another important game, which is going to be difficult but a game we are going into it with the highest intentions which are nothing but to win it.”

Rakhale has scored once in 14 games for TTM this season in the league. He previously spent three seasons at Chippa United, during which time he worked under Mokwena while he was a caretaker coach there for three months, and before that, the former Polokwane City man had four campaigns with Pirates.

Masandawana will be going into Tuesday’s match on the back of a 0-0 draw in the Caf Champions League, away to Sudanese side Al-Hilal.

Mokwena was not especially pleased with that result though and won’t settle for anything less than the maximum against TTM:

“We come into this game on the back of a Champions League encounter and not a performance we are proud of,” he said.

“We are never happy if we don’t win games, any result except a win for Mamelodi Sundowns is a defeat. We are going into this game knowing that we must win it. We have enough motivation.”