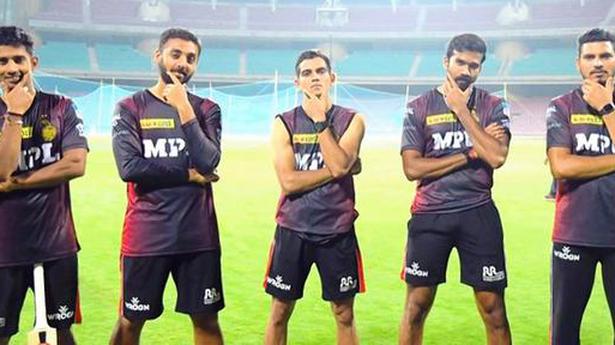 Nayar says the current squad is a balanced one.

These five, along with support staff Abhishek Nayar and Omkar Salvi, had a light training session on Friday evening at the D.Y. Patil Stadium. Their main aim was to get used to the training again after spending a week inside hotel rooms.

Several other players of the team are undergoing quarantine and will join the practice sessions in due course of time.

“As a cricketer whenever you play in India, you grow a lot more. It’s going to be great for the cricketers to come back to India,” assistant coach Nayar told www.kkr.in.

As no team would play at home this season, Nayar said the Knight Riders would miss the ambience of the Eden Gardens.

Nayar expressed confidence in the potential of his side. “We have a very balanced side given the kind of skill-sets every player possesses. We need to ensure that every player is in the right frame of mind through the tournament to be able to perform.

“The likes of Nitish Rana, Shubman Gill and Prasidh Krishna have done it time and again. Prasidh, especially, is now doing it at the international arena. I feel it was quite important for him to go on a big stage. This will give him a lot of confidence,” said Nayar.

The off-spinner is in India as part of the coaching staff of Sunrisers Hyderabad, which is currently based in Chennai for IPL-14. Sri Lankan...
Read more
Cricket

RCB smashed 56 runs in the last three overs, including 21 in the final six deliveries, thanks to de Villiers 34-ball 76 not...
Read more