Ind vs Eng | India looks to deliver the knockout punch 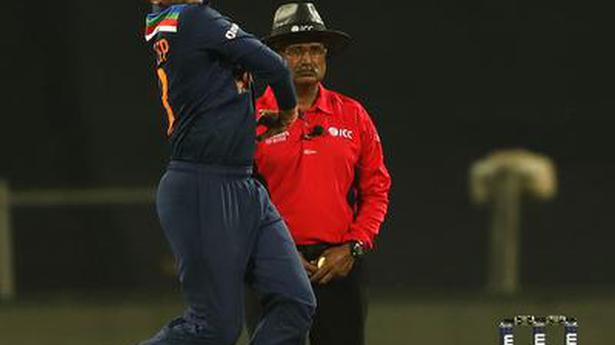 England suffers major setback as the injured Morgan is ruled out of series; Billings to miss second ODI

Over the last two months, twice in as many formats has India come back with a bang to win the series, first in the Tests and then the T20Is.

Things will be slightly different on Friday, however. While India will be relishing the opportunity to seal the ODI series with a second successive win, England, the reigning world champion in the 50-over format, will be desperate to stay alive.

In its quest to do an India on India by winning the last two games, England suffered a major setback ahead of the second ODI at the Maharashtra Cricket Association Stadium. Captain Eoin Morgan has been ruled out of the remaining two ODIs while Sam Billings will be unavailable for selection on Friday.

While Morgan batted despite splitting his webbing trying to stop a ball in the series-opener, Billings suffered a shoulder injury when fielding on Tuesday.

The England team management, while releasing an update on the second ODI, confirmed on Thursday evening that Liam Livingstone will make his ODI debut. With no other specialist batsman as a back-up, it will be interesting to see the combination that England is forced to go in with.

India, on the other hand, has plenty of options to replace the injured Shreyas Iyer. A team spokesperson confirmed on Thursday that the No. 4 batsman had been “ruled out of the remainder of the series” after suffering a serious shoulder injury on Tuesday.

India can either draft in Rishabh Pant or hand Suryakumar Yadav an ODI debut. Both have been in superlative form and will be hoping to get some game-time.

Despite criticism of Kuldeep Yadav’s ordinary outing in the series-opener, it would be prudent for the team management to back the left-arm wrist-spinner.

Kuldeep has spent most of the last four months on the bench and deserves to be given a longer rope if the management believes he can play a vital role in the T20 World Cup later this year.

For two years prior to the COVID-19 outbreak, Kuldeep and Yuzvendra Chahal had emerged as a lethal spin combination in limited-over cricket. But with Kuldeep losing zing — a combination of a reduction in confidence and the slowing of his pace, something that works against a spinner in modern-day cricket — he has moved south in the preferred spinners’ list.

If Kuldeep is persisted with on Friday, it may be a make-or-break opportunity for him, with Chahal waiting in the wings to wear India’s blues one last time before joining the IPL bandwagon.

Ahead of the series, questions were raised about its context. But with India within touching distance of stunning the World champion and snatching its No. 1 ODI ranking, there will be no dearth of context for Friday’s game.