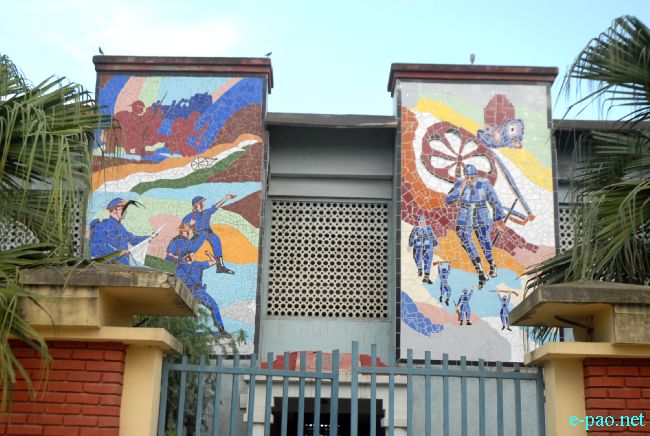 INA in the story of an incomplete diary

Pabung Nake Choudhury seem a bit weak. He seemed a bit stronger hearing the mention of the INA flag. He replied he was the one who did. But did not speak much further. Due to his physical weakness he did not give much time. He looked tired to be sitting for long. A women brought out tea; we drank together and returned back. Once inside the vehicle, Pabung Budha said, “Ibungo, you go and talk to him again without me.

I will entrust you something. He himself did accept it was him who hoisted the INA flag at Moirang. This was what I wanted to hear in his own words. I would now write this truth in my diary. One more thing I wanted to know that he had not answered. It is troubling me. You go and take the stories without me.

Which incident, what happened between these elders… without knowing that and being a part of the conversation… I was dumbstruck and did not know what to think. Once we reached home, me and Pabung talked in detail. Pabung Budha told me a story of a long ago, much before I was born. Had I known the story I would have gone myself to Pabung Nake prior to their meeting, then the reunion between the two would have been a complete one.

But beginning with the wrong things out of over excitement at the news of Pabung Nake being alive and the desire to see him spoilt things. I then went to Pabung Budha to find out what actually happened between them and listened to the story.

In earlier times, prior to the war, the two of them studied together at CC Higher Secondary, sitting on the same bench they were good friends. Both were good students. Both aimed to become pilots. Intermediate Arts (IA) of those days, now equivalent of twelfth standard these days, completing that, they both headed to Calcutta to become pilots together. Without any guidance, we had gone without knowing where to go.

On reaching Calcutta, seeing the jets in flights at sharp tilts on their sides, Pabung Budhamani was very scared. When he told this to Pabung Nake. He became very angry and said he was a coward and was so unbecoming of a Meitei. Pabung Nake stayed back to ‘study pilot’. Pabung Budhamani returned back to Imphal alone. After that the two never met. Back in Imphal when he had no work the government was making efforts to open an office of industries.

He was selected for training and went for it. He returned back after finishing the training. In those days very few educated individuals like Sanasam Gourahari and Sinam Krishnamohan were the influential people in the government administration. They examined the certificate of the training. They also examined the matric (Class X) certificate too. As per the matric certificate records, his name was known as Yumnam Budhamani.

The Sahebs, when they gave the certificate after their training, wrote Mister Budha. The names did not match. Because of this difference in the names and alias being not allowed his hard work at the training did not bear fruit. He could not get the job. Frustrated, the certificate proved useless, he has no reason for keeping it. He tore it there on the spot, narrated Pabung Budhamani.

Later, one day Pabung Budhamani met the sahib who selected him for the training; he asked Pabung if he got the job. Pabung told him that the names in the certificate did not match and so could not get the job. Knowing that he was a good student convinced him again. “we are leaving Manipur, we know you are good, We will give you a job foreget the rank. But you have to give a test”.

Saying this he was made to sit in an exam for recruitment of Amins for Land Measurement. They wanted to select him but also they wanted to do it clean and then they took his test. Some of the questions were  Draw two similar looking pictures. Pabung Budhamani said around seven of them gave the test at Johnstone School, Imphal. Most of them drew pair of oxen, saluting soldiers and many different pictures and went happily after submitting their papers.

He was left alone, unable to draw anything. The invigilator on duty asked him “Mister Budha you are not able to answer anything” At last, a theorem came up in his mind and he drew isosceles triangles and submitted. “You are appointed”, there and then he was appointed for the job, narrated Pabung Budhamani. He prayed to Gonvinda and tried his luck and drew the two isosceles triangles. Early in those days he was the first to become an Amin. That must have been a record. During the war he as the Amin (land recorder) measured the land to construct the airfield for the British planes to land at Tulihal Airport Changangei.

He made very accurate land measurement. He was appreciated for he could accurately calculate the length, breadth and area. Thus, at that time he was employed under the British with salary.
It was the time when the Second World War was growing stronger. News of Azad Hind Fauz raised by Netaji coming into Manipur spreaded. Pamphlets with the headlines ‘Join INA’ carrying message of Netaji were strewn about and news of its establishment in Manipur was also heard.

During the war while going for construction of roads and bridges people picked up these pamphlets which would land them in trouble had the Britishers come to know of it. The brief summary of the –

‘Brother, father, son and sisters and friends of Bharat. I pay my respect to you all. Please do not help Britain, instead of doing that Please help Bharat and Japan who have come together. I myself have come as a soldier. I Subash have devoted both my body and spirit for Bharat Mata. It is my firm belief that this war would free us. If defeated, I would, even if I die, would never again return back to the lap of Bharat Mata’

One day a letter was delivered to Pabung Budhamani’s hand. It read “Mister Budha, you must go to Moirang to carry out the land survey for the construction of market. Come to Babupara, Imphal. There a jeep no… would be waiting for you. You should be sitting next to the driver at the front seat. Leave the main seat vacant. On your way to Moirang, a man would be waiting at Ningthoukhong. He would also board the jeep. He will seat at the vacant front seat. Together you all would be travelling till Moirang and do the survey.

Since the order could not be disobeyed, on the appointed day and time, for the survey at Moirang. I went to Babupara, Imphal and found the jeep and following their orders climbed in and started off. There at Ningthoukhong a non-Manipuri joined us. Without talking much we drove towards Moirang. Being wartime, there were anxiety and worry. With prayers in our hearts we went ahead. In those days, due to the bad road, it took a long time to reach Moirang.

At last we reached. Body was exhausted. The non-Manipuri told us to freshen up and to look for something to eat and drink. Wanting to have a cup of tea, I started looking for a local tea and snacks stall. After the search finally a small shop seen half open. I walked in an asked if they would have tea, the tea was made. While having the tea, suddenly not from a far distance someone seems to beckon at me with his hands from among the dense wild water-plantion leaves.

On looking out again, the man had come quite close and was calling out. It was him, my one time friend who stayed back in Calcutta to study pilot, a Meitei-Pangal by the name Nake Choudhury. He took me aside into the wilderness and showed me the INA uniforms piled up there. He had come to Manipur and was staying there. He had come as the INA ‘Manipur Branch captain’ and started requesting me to join INA.

Led by that non-Manipuri who had come with them Nake was caught and taken away. Pabung Budha was told to go back to Imphal without doing the survey and made to return. In this way Pabung Nake Ahmed Choudhury was caught right infront of his own eyes, this dream like incident was kept untold to anyone. Pabung Budhamani started writing this war dairy.

Listening to this story from Pabung Budhamani himself, I forgot I was breathing; such wonderful story made me more curious, my anxiety grew. For the rest, I was told to go and meet so I went to Pabung Nake Ahmed’s house like a peon to take down his message. Pabung Nake looked weak and dull. Seeing me he looked disinterested but without wasting time, I started asking what I wanted to know. The problem with him was that he did not permit me to record our conversation. Camera too was not allowed. Those days recorders were not as good and did not have a camera. But a hidden video camera was on.

As narrated by Pabung Budha, they both went to ‘study pilot’ together. Pabung Budhamani got scared and returned to Imphal. Both stories were just the same till then, Pabung Nake’s story was more of woes. After Pabung Budhamani return to Imphal he faced a lot of suffering in Calcutta. His money finished off and he had no food to eat. Calcutta, those days was a land filled with Netaji’s voice.

The call for Azad Hind Fauj and Challo Delhi resonated everywhere. The INA movement was very strong. Out of hunger, in search for food, he went up to the ship docked at the river banks of Hoogly and doing the loading, unloading etc, carrying loads just to earn for food. At that point, all that he could think of was food. Everywhere in Calcutta posters of ‘Join INA’ were put up. To try his luck, he enrolled himself.

He sailed to Rangoon in a ship. There he underwent a very rigorous training. Most of the training were done in a dense jungle.