‘I do not see myself playing in defence for the rest of my career’ – Frenkie de Jong has no interest in emulating Ronald Koeman at Barcelona | Goal.com 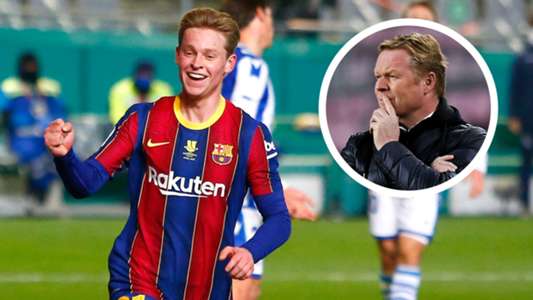 Frenkie de Jong has made it clear he is happy to feature in defence when the situation requires it, but he does not see himself emulate his boss Ronald Koeman and become a mainstay at Barcelona at centre-back.

The Netherlands international was one of the driving forces behind Barcelona’s resurgence this season with a string of impressive performances from midfield, only to then be moved to centre-back due to a number of injuries in defence.

De Jong has continued to do well even while playing out of position and his confident displays on the ball have earned him comparisons to Koeman, who made a name for himself at Camp Nou in the 1990s as one of the best ball-playing defenders around in the game.

Nevertheless, De Jong is adamant he sees himself as a midfielder first and foremost and is keen to return to the middle of the park once Barca are at full strength again in defence.

“I don’t see myself playing as a central defender for the rest of my career,” De Jong told Goal.

“For now it is okay, but I prefer to play in the middle, in midield.

“But if I have to play in another position [to help the team], I will do it.”

De Jong’s move into defence has allowed La Masia graduate Ilaix Moriba to make the step up into the first team, joining the likes of Ansu Fati and Riqui Puig, and the former Ajax man has highlighted the importance of having homegrown players.

“It is very important to have players who came through the academy,” De Jong added.

“They have the club’s DNA, have a lot of quality and are very important for the club.”