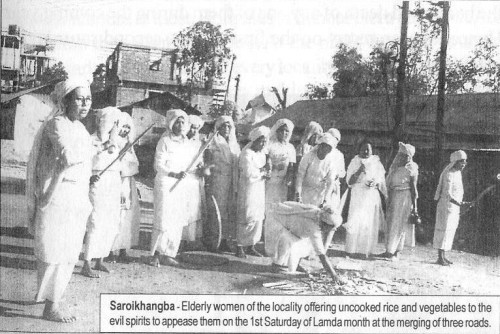 
This Holi festival was known as “Loipan” festival by the traditional Meities at early times. It was the festival of the merriment of gods and goddesses of creation from the immemorial times say round about 7000 B.C. In course of time the festival became synthesised with the Hindu festival of Holi during the reign of Jayshri Gharib-Niwaz Maharaja in 1709 and it became commonly known as Yaosang.

In Manipur most of the festivals are introduced with nature and spiritually blended in their festivities. Among the Meiteis the Holi festival is closely related to Shri Krishna and Shri Chaitanya Mahaprabhu as the observance of the festival starts with the birthday of Chaitanya Mahaprabhu that falls on the full-moon of Lamda Purnima-(March) and continues for five consecutive days.

On another side this Holi festival falls in the month of Lamda has a deeper significance and spiritual implication from the point of view of traditional Meiteis. Lamda is the first month of the year. During this month all the seedlings of all varities of the flowers and plants, the seeds of all kinds of vegetables are sown on the grounds of the mother earth and thus Lamda is the basic month of all months of the year.

Early beautiful flowers start blooming and fruits start giving shapes and colours. At such setting of the nature the minds of the human beings are becoming tender and soft with a feeling of love of God. Thus they start thanks giving prayer to the Alimighty (ATIYA GURU SIDABA) with the songs of creation better known as AUGRI melodies of the Meiteis.

People wear new clothes and their faces are shining like beams flashing out from the lamp on impact of the nice weather of the spring. The wind is breezing slowly touching the human bodies energising them, the heart touching green leaves of the bamboo plants are blowing freely at the rhythm of the calm breeze of the month of Lamda (spring-March) and youths, girls and boys are jubliant, their minds are full of joy and leisurely pleasant to the tones of the time, weather of the month.

Small plants start growing to the full where small birds which are not habituated to walk on the ground start making small nests on the plants. Fruits start ripening on beautiful branches of the fruit-trees, the flower Leipak-Lei starts blooming with its violet colour by breaking the hard soil with its most tendered flower during this month. This is the most beautiful spring season when the Holi Festival is observed for full five days by the Meitei society.

Side by side with the advent of this month of Lamda a very important traditional ceremony known as SAROIKHANGBA is performed on the merging point of three roads from different directions by the elderly ladies on the first and second Saturdays of Lamda month. This is done in the morning when the sun shines with prayer offering uncooked rice, vegetables of different kinds and other things like chilly, salt and coins to the spirits of numenual world to protect the human beings from the harms and hardships that may come during the year.

The house holders mainly women offer Athelpot of whole fine rice, vegetables and other items to SANAMAHI and LEIMAREL IMA SIDABI. It is known as Sidha Thinba. It is a strong belief that all gods and goddesses of every locality assemble at night on a suitable place of their liking and discuss the pros and cons of the coming year relating to human life and they also decide who are going to be demised during the year. This is known as LAIKHUNDINNABA in which the deciding deity of the house must participate.

So people pray to SANAMAHI to guard off the family members from the harms and death of any one of them during the coming year. Hence this ceremony on the first and the second Saturdays is ‘a must’ of the Meiteis.

It is interesting to note that this traditional spiritual rites of Meiteis and the Holi Festival of Meitei Hindu Vaishnavites are going together and enjoyed by all sections of the Meitei society. Events of Holi festival are, construction of a small thatched mandir at a suitable place of every locality, prayer to Chaitanya Mahaprabhu as His idol instals in that temporary mandir and offered fruits, flowers, flags, sweets etc. sankartana of the local people of each and every locality.

When prayer is over the temporary mandir is burnt out. All people young and old, and children join together and enjoy the burning of the mandir. After it the children in groups move around the locality from house to house begging money from door to door by saying NAKATHENGBA. Such activities go on till the early morning of the next day. From the little one up to somewhat older girls come out and move on the road sides begging money from the passer-by mostly young youths.

On the other side, older people both men and women form their Holi Palas (groups) of their locality wherever possible. They also go from house to house and sing the Hari sankrtana on the court yard of the house whereas the owner of the house contributes sizable amount to those Holipalas to honour them and sarikirtana and keep their dignity as well.

At the night time the younsters particularly girls of each and every locality supported by their local brothers organise their merry making Thabal Chongba (a folk dance in a circle) with the songs of creation of the universe led by well known persons for the purpose at early times. But now-a-days we find a big change since no songs have been sung, instead it is replaced by a big band-party with much lights and sounds in a well arranged place of the locality.

From around 30-40 years back there have been a change of this festival as the peoples are organising YAOSANG SPORT MEET at each and every locality of the Meitei society mainly in the valley areas. Thus younsters are engaged in the sports activities instead of begging money on the road-sides by girls and roaming by boys on the streets. This is a big shift of social changes of the modern time. But Hari Sankirtana of Holipalas by elderly people during day time and “Thabal Chongba” by young girls and boys at night are still much popular and encouraged by the people.

The second day of five days festivity is very interesting and charming as it is observed at Shri Shri Govindajee’s temple where inumerable Holipalas both male and female from far and near places are gathered from early morning till the night to give homage and sankirtans to Radha-Govinda with their beautiful flags that indicate the name and place of Holipalas and play of coloured pumps by the devotees to all those who have participated at the Sankirtana in the middle of Govindajee’s mandop is a wonderful sight.

All those who have come to enjoy the holi are full of happiness and they seem to forget themselves and absorb in enjoyment of the Holi Festival. The same performance of Holipalas will repeat on the last and fifthday of Holi Festival at Shri Bijoy Govindajee’s Mandop, Sagolband, Imphal. On the other side the youngers also enjoy much of colours play on these both days of Holi (second and last).

There is another day of prayer and festival, a joyful day in the month of Lamda just somedays after Holi Festival is known as “Baruni Chingkaba or Nongmaichingkaba ” on the eastern side of Imphal Valley. People will go to Nongmaiching hills where they pray to Nongpok Ningthou and Panthoibi or Siva Mahadev.

Around the foot hill Nongmaiching a rivulet flows from south to the north that is known as Chingoi Turel. It is believed that one who dips into the river cure disease. Hence people go there and dip into the river and climb the hills and offer prayer to god and godess