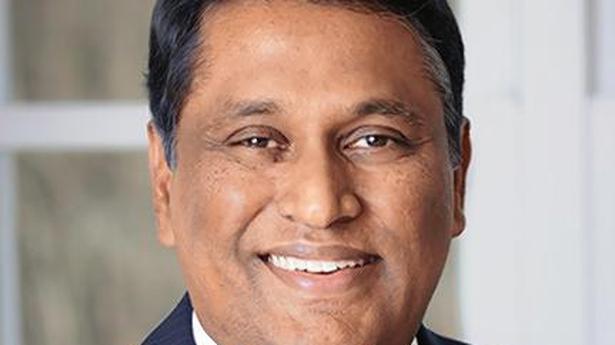 HCL Technologies on Monday reported a 9.9% rise in its consolidated net profit to ₹3,214 crore for the first quarter ended June, and said it expected revenue to grow in double digits in constant currency in the ongoing fiscal, driven by a strong deal pipeline.

The company added that its founder Shiv Nadar will take on the role of Chairman Emeritus and Strategic Adviser to the company’s board.

Mr. Nadar tendered his resignation as the MD as well as director on completing 76 years of age. The company’s current president and CEO C. Vijayakumar has been appointed as the Managing Director with the title of CEO and MD for five years with effect from July 20. Additionally, Vanitha Narayanan has been appointed as additional director and will hold office as independent director.

“We posted 11.7% year-on-year (y-o-y) revenue growth in constant currency and 29% y-o-y growth in Mode 2 services in constant currency headlined by cloud and digital transformation deals. Both booking and pipeline remain very healthy, and the pipeline expanding to the new levels across the board, we continue to see a convergence of application and infrastructure integrated opportunities,” Mr. Vijayakumar said.

He added that this was a very good sign for the future as it made HCL Technologies’ growth more broad-based and would help accelerate growth across service lines. Further, he said that the company was ‘confident of a good quarter-on-quarter growth’ for the rest of this year, enabled by 37% y-o-y growth in bookings and 7,500-plus net hiring this quarter.

The company’s first-quarter total contract value of new deal wins rose 37% to $1,664 million from a year earlier. In constant currency terms, the company’s revenue in the June 2021 quarter grew 11.7% y-o-y.

The revenue in constant currency terms is expected to grow in double digits, while EBIT margin is expected to be between 19% and 21% for FY’22, the company said.

During the virtual briefing, HCL Technologies chief human resources office Apparao V.V said that last year the company had onboarded 14,600 freshers globally. “This year, we are targeting anywhere between 20,000-22,000 freshers and I will not be surprised if we cross this number… In Q2, we are targeting (to onboard) 6,000 (freshers),” he said.

He added that the company, which had given salary increases in October last year, will offer wage raises from July 1 as it gets back to its regular cycle.

Replying to a query on employees coming back to office, Mr. Apparao said currently only about 3% of the employees in India were coming to the workplace. “We will take (a call on) it as we go…depending on the customers’ needs,” he added.

The board declared an interim dividend of ₹6 per equity share for the financial year FY22.