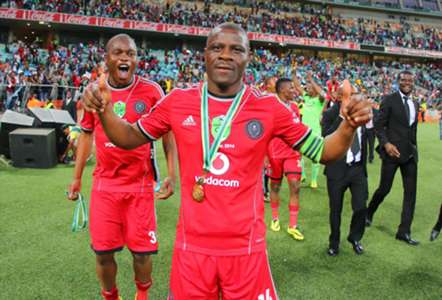 Former Orlando Pirates skipper Lekgwathi has explained how having a solid group of senior players around him was key to the remarkable success the Sea Robbers enjoyed a decade ago.

The tough-tackling defender can list himself among the club’s most successful captains, having skippered them to six trophies – including two league titles – in two seasons (2010/11 and 2011/12) under coach Ruud Krol.

In fact, 2012 was the last time the Sea Robbers won the league title, and they have only managed two trophies since: the 2014 Nedbank Cup, and the 2020 MTN8, which they won in December last year after beating Bloemfontein Celtic.

In the interim, Pirates have twice finished as runners-up in the league and lost in the finals in the Nedbank Cup, the Caf Confederation Cup, the Caf Champions League and the MTN8.

With coaches and players changing constantly, and some like Lekgwathi and Benni McCarthy going into retirement, it’s been difficult for Pirates to maintain a strong core group of senior players.

That wasn’t the case a decade ago when Lekgwathi was wearing the armband.

“[Pirates defender] Siyabonga Sangweni was playing for Bafana Bafana, Benni was coming from England. They made my job easy as a captain because they were always playing their roles,” Lekgwathi told SuperSport TV after Bucs lost 1-0 to Kaizer Chiefs in Sunday’s Soweto derby.

“I remember when Benni came, we sat down and I said to him, [that] he achieved more than me. But I wanted him to help me lead the team.

“I had Benson [Mhlongo], I had Moeneeb [Josephs], and I said he must just come to that group of senior players.

“It’s not easy to captain a team of youngsters. You need senior players that will help you to control the team,” the now 44-year-old Lekgwathi continued.

“I remember in 2010 when we won the league. Ajax Cape Town, they had only youngsters, their only senior player was Hans Vonk. I think that was their downfall of their losing the league.”

The Buccaneers’ loss to Amakhosi on Sunday was a setback to their hopes of challenging Mamelodi Sundowns for the league title.

Sundowns did, later on in the day, drop two points to Black Leopards after a 1-1 draw at the Loftus Stadium.

The Brazilians, however, remain four points clear of second-placed Golden Arrows and five above both SuperSport United and Pirates, despite having played three games fewer than the two Gauteng teams and two fewer than the KwaZulu-Natal club.