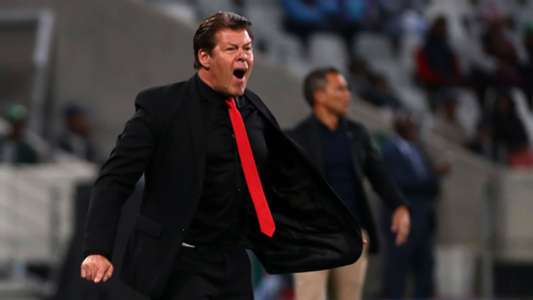 Chippa United technical advisor Luc Eymael has confirmed he is preparing to return to Belgium as his services might no longer be required by the Gqeberha club, without him overseeing a single match for the second time since “political interference” is blocking him from working in South Africa.

The controversial Belgian was handed a role on the Chilli Boys’ technical department on Monday and two days after he was appointed, he is set to be relieved of his duties.

This would be a similar situation to four months ago when he was fired by Chippa just 24 hours after they had hired him as their head coach.

At that time, club owner Siviwe Mpengesi gave in to pressure from Safa and some politicians, who objected to Eymael’s appointment following some racist remarks he allegedly made during his time as Young African coach in Tanzania.

“No they don’t want to fire me, they want to withdraw. Yes, why fire? It is because of political interference,” Eymael told Goal.

“Perhaps I will travel to Johannesburg tomorrow [Thursday] and then I will have to have a Covid-19 test and go back to Belgium.”

Chippa’s management is set to meet the technical team on Wednesday according to the club’s communication manager Sisa Majola, although the meeting’s agenda has not been shared.

“We will meet the management this morning, and after that we will meet with the technical team‚” Majola told Times Live.

Following his appointment on Monday, Eymael had immediately got down to work with former Mamelodi Sundowns midfielder Luyolo Nomandela becoming the first player to be signed during his tenure as technical advisor.

That came amid pressure, especially from opposition political party Economic Freedom Fighters (EFF), who led the objection of Eymael rejoining Chippa in a strongly-worded statement.

“The EFF Eastern Cape rejects and condemns the appointment of the racist and arrogant Luc Eymael by Chippa United as it’s new coach after the sacking of Dan Malesela,” the party said.

“This racist was rejected by Safa last year when he planned his return to the country and province‚ and [Safa] announced that it intended to oppose his application for a work permit at home affairs.‚” the par

“The owner of Chippa United has once more stunned the nation and province by appointing the same racist coach. We want to reiterate our stance that we will ensure Luc Eymael won’t work in our province‚ he is not welcome and we don’t have room for racists in this country.

“If Siviwe Mpengesi knows what’s best for his team Chippa United‚ he will withdraw the appointment of this unrepentant racist from Belgium‚ the country of King Leopold who killed black people in Africa.

“We are a country with a dark past [that] still deals … with its challenges of racism … we don’t need another racist to add to our problems.”