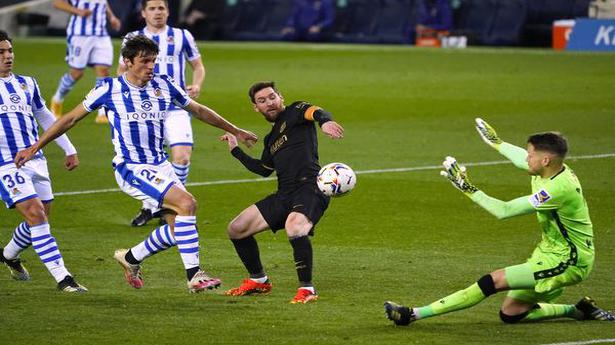 Lionel Messi scored twice on Sunday as Barcelona trounced Real Sociedad 6-1 to keep the pressure on Atletico Madrid, which squeezed past Alaves thanks to a late penalty save from Jan Oblak.

Oblak’s 86th-minute heroics ensured Luis Suarez’s 500th career goal was enough for a 1-0 victory at the Wanda Metropolitano, meaning the gap at the top of LaLiga remains at four points, with 10 games left to play.

But the contrast between Atletico’s nervy win against 19th-placed Alaves and Barca’s demolition of a Real Sociedad side with hopes of qualifying for Europe spoke volumes about where the momentum lies in the Spanish title race.

Atletico will hope Oblak’s save can prove to be a turning point after a challenging few weeks, while the international break might offer Diego Simeone’s side a chance to reset and refresh ahead of the run-in.

“There are games where you suffer but that’s what makes football beautiful,” said Oblak.

Simeone said: “Like all great teams, there is always one that scores a lot of goals and one that makes a lot of saves. They are both decisive players who make the team stronger.”

Barcelona has hit its stride, the six goals against Real Sociedad no less than it deserved for a scintillating attacking display, and perhaps its best since Ronald Koeman took charge.

“The team has improved a lot recently,” said Koeman. “We’ve gone a lot of games without losing in the league, which was the only way to get back in the fight for th title.

“But we’re still behind Atleti, Real Madrid are stronger. We have to keep going to the end.”

Messi scored his 11th and 12 goals in his last 10 games, and made it 16 in 12 this year. The 33-year-old has also now passed Xavi Hernandez’s record of 767 Barcelona appearances, which he had equalled against Huesca on Monday.

Messi did not plough a lone furrow at the Reale Arena, where Sergino Dest scored twice either side of half-time after Antoine Griezmann slammed in the opener.

Ousmane Dembele and Real Sociedad’s Ander Barrenetxea — with arguably the goal of the night — both registered between Messi’s double in the second half.

For Barcelona, it is a ninth consecutive away win in the league, with a club record 10th within its grasp if it beats Real Madrid in the Clasico on April 10.

Alexandre Lacazette completed Arsenal’s comeback from three goals down to draw 3-3 and prevent West Ham from moving level on points with fourth-place Chelsea in the Premier League on Sunday.

Arsenal is nine points from the four Champions League places after recovering a point from a game it looked to have lost after conceding three times in the opening 32 minutes.

Tottenham bounced back from a shock Europa League exit to Dinamo Zagreb with a 2-0 win at Aston Villa on Sunday to rekindle its hopes of a top-four finish.

Jose Mourinho made eight changes in an attempt to summon a response and got the result he needed, even if the performance still left much to be desired.

The 27-year-old is keen on using his resources to build the leaders of tomorrow in the Southern African country Aston Villa...
Read more
Football

Marco Pezzaiuoli’s managerial reign at Bengaluru FC (BFC) was off to a convincing start, with an easy 5-0 victory over Nepalese side Tribhuvan...
Read more