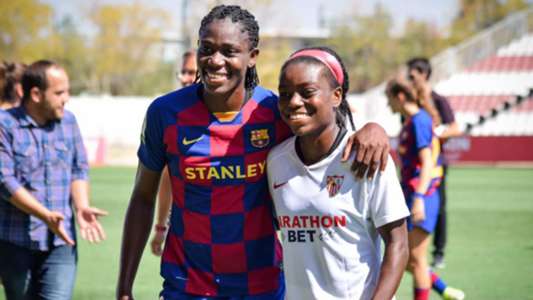 This will be the 22nd meeting between the two teams in all competitions since the first in 2004 and fifth this year, following a 4-0 victory celebrated by Barcelona at Sevilla last month.

The two teams also met in the competition last term, with Oshoala’s brace leading the Catalans to a 6-0 semi-final win on their route to claiming a fifth Copa de la Reina crown in their history.

On the other hand, Cristian Toro’s side will be counting on the good form of Coleman and Payne to end a 12-match losing streak in all competitions against Lluis Cortes’ team, since a 0-0 draw in 2014.

The tie comes just four days away from a Spanish Primera Iberdrola showdown between the two sides, with the first-ever women’s Clasico ending 2-0 in favour for Real in January.

While Spanish-Nigerian born Andrea Okene will be rooting for Levante to claim a home win over Granadilla Tenerife, who has Cote d’Ivoire’s Ange N’Guessan and Cameroon’s Raissa Feudjio on their books.

The single-leg quarter-final encounters are scheduled to take place on April 21 and 22, while the final will be held in the Community of Madrid on May 29 or 30.

The 27-year-old is keen on using his resources to build the leaders of tomorrow in the Southern African country Aston Villa...
Read more
Football

Marco Pezzaiuoli’s managerial reign at Bengaluru FC (BFC) was off to a convincing start, with an easy 5-0 victory over Nepalese side Tribhuvan...
Read more