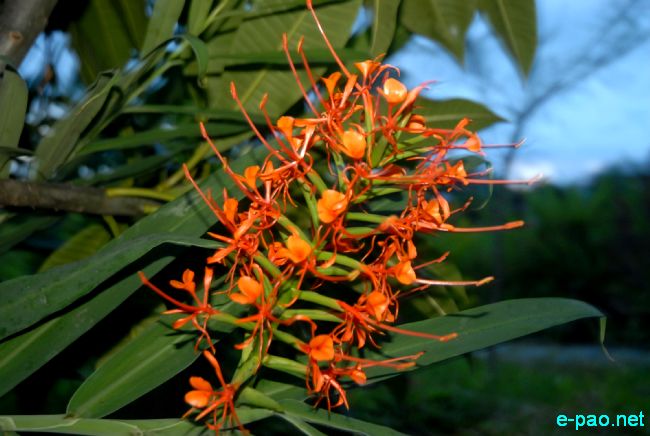 Manipur’s prolonged existence as small Asiatic sovereign kingdom had impressive historical significance until the power was defeated in Anglo-Manipuri War,1891.

Among other rich traditional practices, using of nachomlei (posy) by womenfolk has been a special niche with nurturing of varies of indigenous flowers. Among many other traditionally used flowers, there is unique place of the flower “Ingellei” which is one among the rich and popularly used indigenous flowers of the state of Manipur.

The flower is believed to have been grown and bloomed with its unique and enchanting looks in the month of July (Ingel tha) in the Tangkham Lou Hillock of Awang Koubru where the Goddess Phou-oibi was believed staying pleasingly at her best choice and at everybody’s taking it as a sacred place.

The Awang Koubru Tangkham Lou is a valuable place for both the hill and plain inhabitants of the once kingdom of Manipur and there occurred often feuds and tussles among the indigenous brethren communities in the struggles for owning the place taking as treasure-land.

As part of historical incitements in the mindsets of the communities in seeking to possessing the place, it is recorded that there happened even fierce fights in between the powerful Maram king Khangyangba and the Thangal king Pangdaba and the later was defeated.

And also, as the place was often controlled by the Meitei Kings at wishes with the believe that the Phou-oibi, the Goddess of wealth and prosperity was living in the place, people of the hills and the valley began to take it as a sacred place and performed worshipping there for blessings from the goddess Phou-oibi. The inhabitants of the place are still known as the Tangkham Hao by the Meitei community.

Amazingly to the Nature’s gift and the blessing of the creator, the beautiful flower “Ingellei” was regularly showing off tender buds in later part part of Inga (May-June) and in full blooms attracting the eyes and hearts of all in this sacred place in the early part Ingel (June-July) every year giving the message of the fatalities of wars and feuds.

It all indicates that the flower Ingellei is bloomed during recreation period after sawing off seeds and cultivation of edible plants including rice, vegetation and cereals etc. just following the Meitei New Year festival in the month of April-May with observance of the Chei houba or Cheiraoba festival with performing the ritual practices of Singtek Singthaba and Singsatpa that calculate the year’s population and the fates of people of the land.

It is further described in the aged old Meitei manuscripts that the flower is bloomed in full red colours in bundles at one stalk with guarded by the smooth oar shaped (or speared shape) long leaves signifying the symbol of war or feuds. So, the flower was regarded as the messenger of war or tussles to the Kangla, the capital/palace of the Kingdom of Manipur.

It all shows that the Manipur’s indigenous flower “Ingellei” is a precious flower still blooming in full reds enchanting the hearts and minds of the people and giving the cultural values of the land with strongly grasping values of the flower in the common history of all the indigenous communities of the state of Manipur. 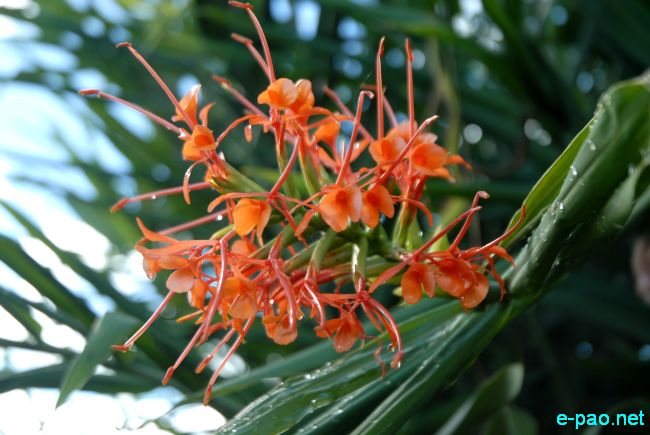 Amazingly, these days, the artisans of the state like Huirongbam Shanti Devi of Thongju Pheijaleitong have begun crafting of the beautiful indigenous flowers like Ingellei by using Cocoons as raw materials pacing along the path of “Waste to Wealth and Cultural Sustenance”.

Shanti Devi crafts the Ingellei by following the processes as such

(2) Boiling for smoothening and softening

(3) Drying in the indirect sunlight

(5) Cutting off the petals and sepals similitude to those of Ingellei flower.

(7) Construction of the flower with strong concentration;

and period of crafting the special pieces is 5 to 10 days).

To translating the same as;

Getting withered without noticing,…

Disappearing in the far distant, out of reach…

Yet, I have no reason to be sad.


Words of the withering soul:

I did not get withered on my wish…..

The silent earth is so expressive,….

It was the bitter wind I could not take,…….

It was the sunshine that shines so bright,….

It was the rain that kept rolling on the face,……….

I simply fall without uttering a single word to my lover…

to save me from getting withered……

Yet, I have no reason to be sad.

I blame you not, for mine the fault was…..

I only kissed you tenderly through my wind,……..

only lit some lighter light of freedom through my sunshine,….

I only fall on my knees to make you wet,..

Yet, the fault was mine and not yours…

Blowing away, bound by nothing,

Leaving scent of her fragile life.

She is a poorly written tripe.

She is not bound, not made bythe earth.

The writer is from Thongju