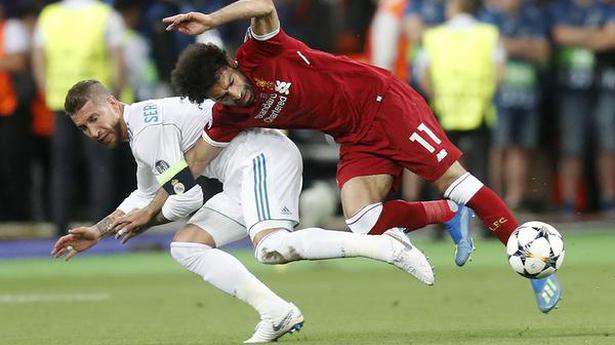 A year later Liverpool hoisted the Champions League trophy. But that high has been followed by a fall from grace as Liverpool prepares to face Real again in the first leg of their Champions League quarterfinal in Madrid on Tuesday.

Jurgen Klopp’s men are in a scrap just to make it into next season’s Champions League via a top-four finish in the Premier League.

Injuries have taken their toll. Captain Jordan Henderson and centre-backs Virgil Van Dijk, Joe Gomez, Joel Matip will all miss both legs of the Real tie and are unlikely to play again this season.

However, there could yet be a happy ending to a difficult season after Liverpool’s comprehensive win at Arsenal in the Premier League.

Real might have taken more comfort from Liverpool’s problems were it not confronting its own period of introspection.

Since winning a third consecutive Champions League three years ago, the team has stalled, a failure to update and refresh seeing it tumble down the European pecking order.

For now, Zinedine Zidane will turn again to his tried and trusted for the first leg at Valdebebas, with Luka Modric, Casemiro, Toni Kroos and Karim Benzema all three years older than the last time they played Liverpool.

Meanwhile, Borussia Dortmund is experiencing another bout of reflection, self-criticism and doubt just before it takes on Manchester City.

It has become a regular occurrence at the club in recent seasons, and usually strikes when everything appears to be going well, with Dortmund’s Bundesliga loss to Eintracht Frankfurt over the weekend leaving it outside Champions League qualification spots.

Dortmund will look to Erling Braut Haaland to carry it past his father’s old club. Haaland has scored in each of his six appearances and is the competition’s top-scorer with 10 goals. He will be keen to add to that tally but he cannot do it alone.

City meanwhile will arrive for the game fresh as manager Pep Guardiola made six changes over the weekend in the league win over Leicester. With no big injury worries, City should enter the game as favourites.