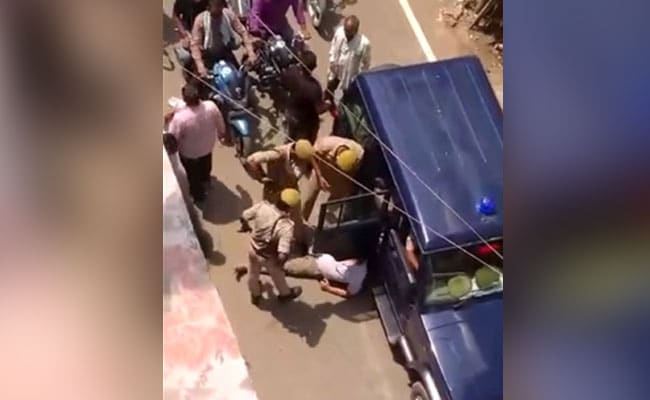 Traders later gheroed the police stattion over such high-handedness.

The police’s mask-checking exercise at a popular market in eastern Uttar Pradesh’s Azamgarh town sparked anger among local traders after one of them was forcibly taken away by the police for allegedly not wearing a mask. The officials’ overbearing action yesterday led to the merchants gheraoing the local police station and some minor vandalism. Tempers calmed only after senior authorities assured a probe into the incident.

Videos of the incident show the police attempting to take away one of the traders by stuffing him into a vehicle even as he resisted. They are seeing shoving away locals trying to intervene in the crowded market. The merchant, who was also allegedly assaulted by the cops, himself drops to the ground exhausted a couple of times, calling out for help, before being taken away.

The traders later assembled before the local police station and gheraoed it, seeking the man’s release and action against the alleged police high-handedness. Some vandalism followed with police vehicles’ wind screens and other property being damaged.

The matter was eventually settled after an enquiry was promised by the administration.

“The incident took place following heated exchanges with a trader during a Covid protocol exercise. The trader was brought to the police station. Some anti-social elements joined the traders who arrived there and raised slogans and created a ruckus,” said Azamgarh Superintendent of Police Sudhir Kumar Singh.

“We have settled the matters with the traders now. The police and the trading community have always cooperated. Their complaint has been registered and the trader (whose detainment sparked the anger) has been subjected to medical tests,” Mr Singh said.

The vandals will be identified through CCTV visuals and acted against, the police said.

The incident took place on the same day as another brutal one in Indore, Madhya Pradesh, where a 35-year-old man was beaten up mercilessly by two cops in full public view — before his wailing underage son — for his facial mask slipping down slightly.