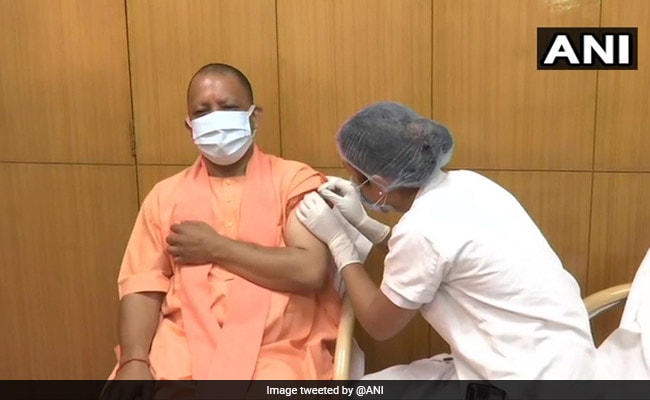 Yogi Adityanath got himself vaccinated at Lucknow’s Civil Hospital amid flickering lights.

Uttar Pradesh Chief Minister Yogi Adityanath today received his first dose of Covid- 19 vaccine at the capital’s Shyama Prasad Mukherjee Civil Hospital amid a rising number of cases in the state. He thanked Prime Minister Narendra Modi and the various scientists for developing the injections in India. Assuring citizens of its safety, he urged everyone to get themselves inoculated and help create a safety armour for the population.

He urged people to remain abundantly cautious even after getting their doses, and stick to the Covid-19 protocol, including social distancing and wearing of masks, ANI reported.

“Despite its 24 crore population, Uttar Pradesh’s performance till now has been exemplary and I appeal to people to follow the discipline hereafter, too,” the Uttar Pradesh Chief Minister told ANI.

The state today reported 4,136 new Covid-19 cases and 31 deaths, taking its overall figure to 6,30,059 infections and 8,881 fatalities. It was among the five states with the greatest number of new cases in the past 24 hours, according to government data.

Earlier, he was administered Bharat Biotech’s COVAXIN by nurse Rashmi Jeet Singh, according to PTI, amid flickering lights apparently owing to some faulty power condition at the Lucknow hospital. “The Chief Minister took all information regarding the vaccine and after taking the jab, waited for 30 minutes before leaving the hospital,” Ms Singh told PTI.

“Today I, too, joined the country’s, and the world’s, battle against Corona pandemic. I think the Prime Minister for making the vaccine available for free for citizens,” he said.

“The new strain that has emerged is a result of a negligence,” he said, appealing for people to be careful even after getting inoculated.

<!-- -->There has been shortage of Remdesivir in hospitals and medical shops all over the country.Mumbai: The Nagpur bench of the Bombay High...
Read more
National

<!-- -->An additional 1,000 cylinders would be provided by the DRDO later.New Delhi: The Defence Research and Development Organisation (DRDO) on Monday supplied...
Read more