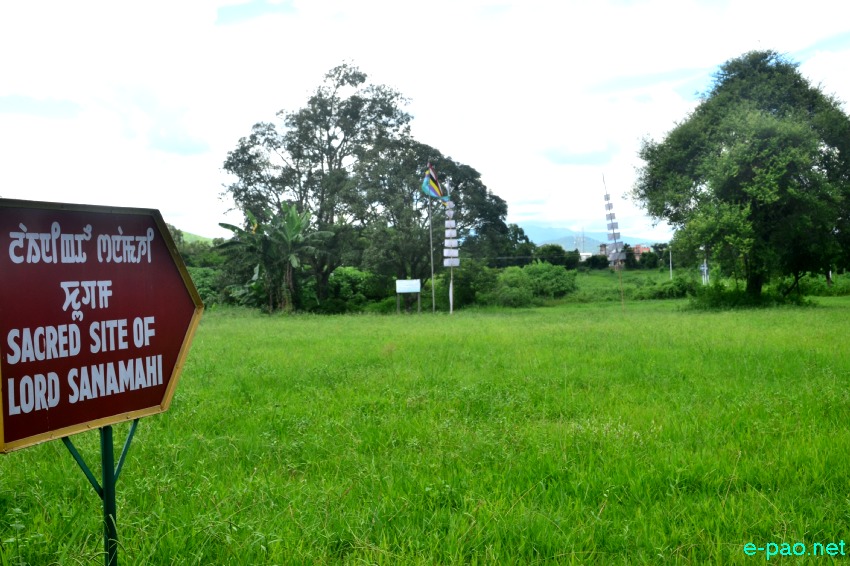 During the reign of Meidingu Garibniwaz new clothes were put on. “Sanamahi Laihui” narrates the origin of Sanamahi and how people (of Manipur) started worshipping his idol. In the mythic story, “Guru Sidaba” (see personal interpretations*) produced three sons who became responsible for creation (the land and humans).

Sanamahi, one of the sons of Guru Sidaba, created man in the image of Guru. The Guru gave the throne to Pakhangba, made Sanamahi the god of common people, and asked “Atiya Sidaba” to be with him (Guru Sidaba).

Sanamahi was born to Meidingu Khagemba. At the age of 5, abandoning all his clothes on branches of a tree in “apong” garden, he became god. After Meitingu Poirei and Selbi Paikhomba, during the reign of Tubi Charairongba, efforts were made to bring Hinduism. However, he died before achieving the goal. Garibniwaz took on Sakhya and Gauriya religions under Gangadhar and Sri Gopaldas Brahmins and ruled the land.

Then Santidas Bhagwandas and Narayandas together established (founded) Ramanandi religion in the Meetei land. The king also adopted Ramanandi and destroyed Sanamahi and “Umanglais” (gods of the groves).

Statue of Sanamahi built by his grandfather Khagemba was also demolished. Misery fell over the common people. His son (mapari) also fell sick of unknown causes. When Moirang Lalhanba said it was due to demolition of statue of Sanamahi, the king banished him from the palace.

Later, on the order of the king, Kekru Selheiba made a cast of Sanamahi on the image of the King and the Queen. Veda incantations of Hindu were used. Wangkhei Lake was dug; King’s daughter Tamphasana was put on the feet of the guru.

To study the origin of the tribes of Manipur, it is important to study the ancient books. To know the culture and mores completely and in detail, books are essential. Hence, I thank Shri Mayanglambam Gourchandra again and again for studying these ancient texts to bring Manipuri literature to the next level and for making Manipuri the language of the mass. And I believe in future also he will bring such texts before us.

Khoiyum Laiyingthau Guru Sidaba. He lived in a place unknown to humans, he was light and darkness, and on his feet were clouds. By taking in the mother of creation Leimarel Sidabi, from his body three sons were born – Ha, Ra, and Sha. He asked the eldest to create the land. Khoiyum Ashiba asked his father how do I create fruits and flowers.

With love Guru Sidaba produced from his body four of flowers, four of rain, rituals, men, culture, animals, insects, etc., and showed them to him. But when Ashiba built over the surface of water, the younger brother destroyed them. Khoiyum Ashiba came under the feet of Guru Sidaba. Guru Sidaba asked him to create the land again. Guru Sidaba produced Nongthang Leima from his ring finger.

“Daughter while your brother creates the land you play in the water”, ordered the Guru Sidaba. The eldest son again started creating the land. When the younger brother came to destroy the land again, he met Tampha Nongthang Leima, who could steal heart of men.

“Who are you girl with beautiful face which draws such extreme desire”, he asked. Upon this the girl gave a sideways glance and smiling asked, “Who are you asking me questions? Who are your mother and father? I have no father, I have no mother, I have no name. After saying this to me, the earth merged into the water”, she replied.

The Guru Sidaba made Tampha Awangbi Leimaren Sidabi from a hair of his body. Her color was that of copper and brass; she was part human part spirit. “Daughter help king Ashiba in the creation of the land.”

Tampha Awangbi emerged from the water wearing fire in her waist. When the younger king came for destruction again, he met Tampha Awangbi. When he asked who are you who steals one’s heart, Tampha replied smiling, “I’m an unmarried woman.”

While the younger king and Tampha were thus engaged in conversation, the elder king sowed the seeds of life and it started to bear fruits. Through seven young male gods and eight young goddesses, the rivers, lake, mountains, king of the land, sun and moon, stars etc. were made.

Then they sang the “leiroi nongloi“. Ching-u Ashiba was elated and came to Guru Sidaba. Guru said, “Son Ashiba make human settlements”. When Ashiba took out the earthworms from inside himself to make settlements, Guru Sidaba said, “Son, how can such small creatures establish villages?” Then he made the frog. But Guru Sidaba was not satisfied.

Then Ashiba made human in the image of Guru Sidaba. Then Guru Sidaba was satisfied (refer my personal interpretations**).

Then Leimarel Sidabi was asked to incarnate as Phouoibi by Guru Sidaba. Then Guru Sidaba told his three sons, “Sons go around the earth. The golden throne will be given to whoever returns first”.

Khoiyum Sidaba circumambulated the earth. The youngest saying that there is nothing greater than his father went around the father’s throne seven times, and thus became the first to return. The middle son came back after the eldest.

“As the youngest knew the greatness of his father,

let him be called Pakhangba (one who knows one’s father).

Let him sit on the golden throne.

Let the people worship you, he told the eldest son.

O middle son you will be called Atiya and will be with me.

Daughter Nongthang Leima will be protector on my left“.

Khoiyum Sidaba was then born as son of King Khagemba. The second half of manuscript describes coming of Hinduism. I have skipped this part as it is one of the most contentious and most discussed topics.

Only one line may be added from this part which seem to suggests that the name Manipur was coined around this time:

(the land is not easy and the palace is not common; hence let it be named Manipur).

The writer can be contacted at jamesoinam(AT)gmail(DOT)com