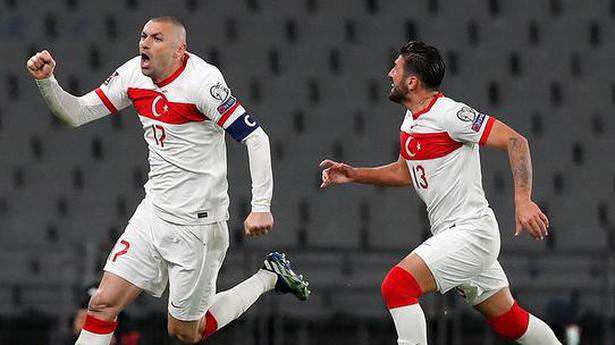 The Netherlands slumped to a dramatic 4-2 defeat against Turkey in its opening 2022 World Cup qualifier on Wednesday, while reigning champion France was held by Ukraine despite a brilliant Antoine Griezmann goal and Belgium came from behind to beat Wales.

Yilmaz’s wonderful free-kick sealed him a hat-trick and Turkey a crucial win, though, in a match between the two favourites to qualify from Group G.

The defeat was a dreadful start to the campaign for the Netherlands, which failed to qualify for either Euro 2016 or the 2018 World Cup, but is one of the fancied sides ahead of the delayed Euro 2020 finals this year.

France kicked off its title defence with a 1-1 draw against Ukraine. Griezmann curled a fine finish from outside the box into the top corner in the 19th minute to draw level with David Trezeguet in fourth place on France’s all-time goal-scoring list, with 34.

But Presnel Kimpembe put through his own net before the hour mark to draw Ukraine level.

Belgium, the world’s No. 1 side, fell behind early against Wales but fought back to outclass its opponent 3-1.

Harry Wilson scored an excellent 10th-minute opener for Wales in Leuven, but Kevin De Bruyne and Thorgan Hazard netted in the space of six minutes to put the hosts ahead before the half-hour mark.

Belgium’s record goal-scorer Romelu Lukaku wrapped up the points with a penalty 17 minutes from time, gaining the Red Devils a measure of revenge for their Euro 2016 quarterfinal loss to Wales.

Portugal, which defends the title at Euro 2020 later this year, struggled in its Group A opener against Azerbaijan in Turin.

But Maksim Medvedev’s own goal nine minutes before half-time was enough, despite Cristiano Ronaldo, on 102 international goals, failing to close the gap to Iranian Ali Daei’s all-time record of 109.

Portugal’s group rival Serbia battled back to beat the Republic of Ireland 3-2 as Aleksandar Mitrovic came off the bench to grab a second-half double.

Elsewhere, Russia stuttered to a 3-1 win in Malta while Croatia was beaten by Sandi Lovric’s early goal for Slovenia.